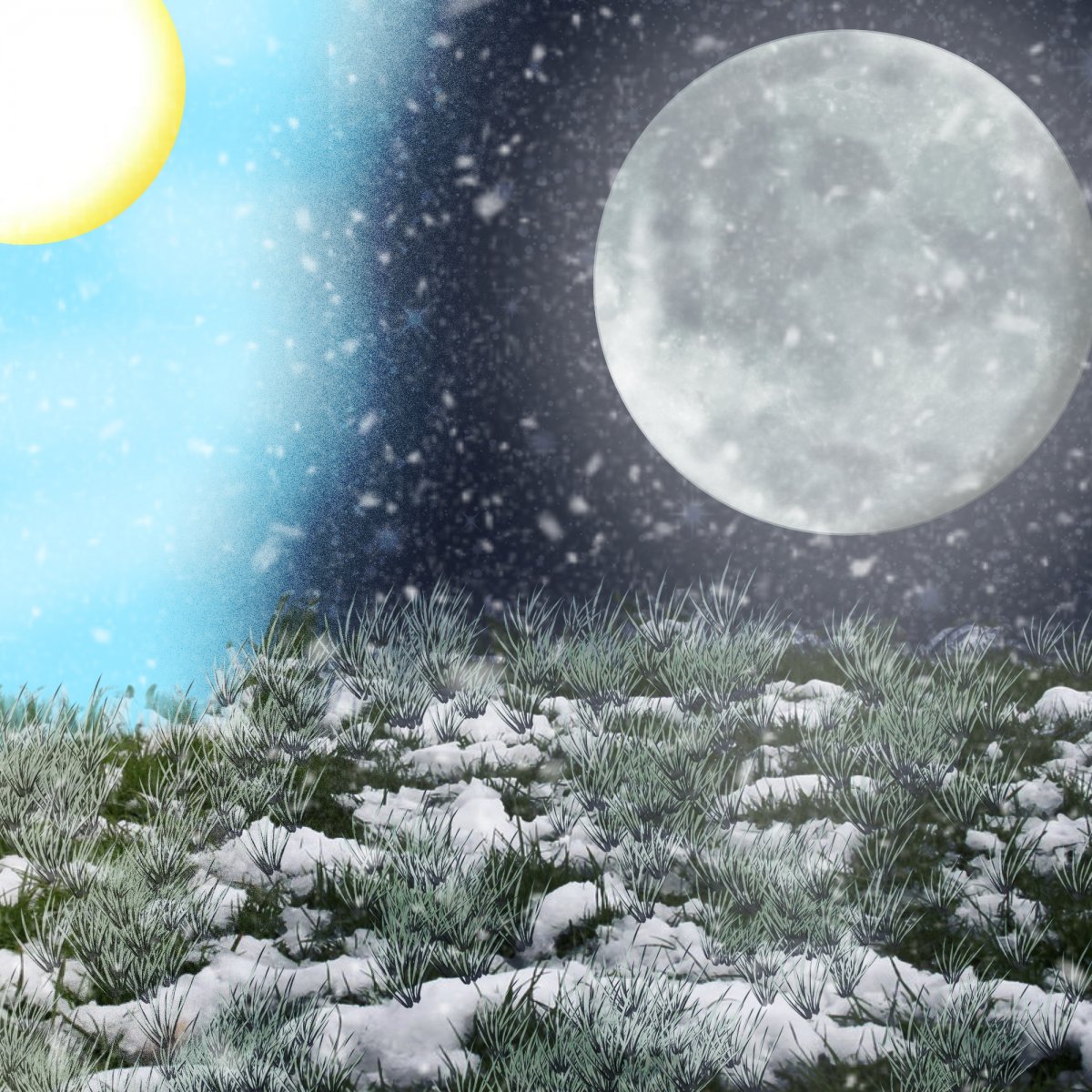 Happy Winter Solstice 2021 (and Summer Solstice in the southern hemisphere).

We are all encountering yet another festive period of turbulent times - uncertainty, worry, separation from our loved ones, restricted travel...two years we have endured this and it is not getting any easier. But at this time where the longest night and shortest day meet for their bi-annual battle of who gains power over light or dark....remember that this time the light wins over dark for us in the northern hemisphere and this means a gradual change from long dark nights to an ever increasing lightness in our lives. Use this time to look forward to the new year. Look back on what has been and with the energies of our recent full moon, plan your path ahead for the new year. Use these next few days to restructure your goals and put your energies in to looking positively and leap in to 2022 with as much enthusiasm as you can.

The Caillieach of Winter was the grandmother and midwife of the maiden of Spring and yet is also a later life stage of the same goddess. Indeed at Oimelc, the early February festival sacred to the maiden Brighid or Bridget in the northern hemisphere (Lughnassadh or the first grain harvest in the south), was right into Christian times celebrated with a game played on a chequered board. In this game small figures or sometimes actual people on a life sized board, acted out the battle between the old witch or hag of winter with her dragon and lion and the maiden of spring with her lamb and hail storm. The maiden inevitably defeated the old hag so Spring could return.

Each festival in each hemisphere carries the seeds of its mirror festival six months and half a world away. This brings us back to December and Midwinter/summer. When the sun is at its height at Midsummer in the southern hemisphere we know that it must thereafter decline on December 21-22 and darker days begin. At the same time (give or take a few time zone differences) in the northern hemisphere when the sun is at its lowest December point the sun will be reborn heralding the return of life and lighter days.

The Celts saw this as an ongoing battle between the brothers of light and darkness, Llew and Goronwy in never ending cycle (even before people knew the earth was round). 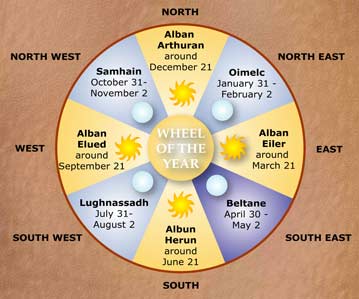 So how you celebrate this and any change point of the wheel is your choice as to what feels right in connection with the rhythm of the earth beneath your feet and the sun above your head. Locally grown flowers, herbs and stones and crystals belonging to your region are always the best whatever the time of year or the way you choose to celebrate. But I believe it can be helpful to look across the wheel to the mirror festival and see them as two parts of the same whole. For at the height of growth are the seeds of decay and through decay is new life born.

Because you will be celebrating Christmas around this time in the southern hemisphere there may be aspects of the Midwinter festival you wish to add to your own Midsummer celebrations.

Alban Arthuran, Yule or Mid Winter Solstice from around December 20-22

Focus of the festival:

For the rebirth of light and hope, for domestic happiness and stability, family togetherness, anything to do with the home and property and for financial security; for long term money ventures, for patience and for accepting what cannot be changed; for very old people, for carers of the elderly, sick or vulnerable, for welcoming home travellers and the calling back people you still miss from the past into your life and for restoring enthusiasm and health in those who are worn down by illness or lack of hope.

Keywords: Hope, security and stability
Emphasis of the festival: Rekindling extinguished flames/light in the darkness
Energies of the Season: Turning point as the energies begin to rise again from the lowest point
Symbols: Evergreen boughs especially pine or fir, small logs of wood especially oak, pine and ash, holly and ivy sprigs, gold coins and jewellery, red, green, white and gold candles, silver, red, green and gold ribbons and baubles, tiny wrapped presents to be opened on the Solstice or a pre Christmas celebration
Tree: Holly
Incenses, flowers and herbs : Bay, cedar, feverfew, frankincense and myrrh mixed, holly, juniper, pine, rosemary, sage and all spices, poinsettias , scarlet and white flowers and rosemary
Candle colours: White, scarlet, gold, green and purple
Crystals: Amazonite, malachite, garnet, snow quartz, snowflake obsidian, opal aura
Angel: Gabriel, Archangel of the Moon, who took the news to Mary that she would have a son Jesus. Picture Gabriel in silver or clothed in the blue of the night sky with a mantle of stars and a crescent moon for his halo, with a golden horn and a white lily, alternatively with a lantern in his right hand and with a mirror made of jasper in his left.

Alban Arthuran means in Gaelic the light of Arthur and refers to the rebirth of Arthur, the sun king as the Divine Child called the Mabon in Celtic spirituality. The Sun godking is reborn after the fear that the world will be overwhelmed by darkness on the shortest day of the year.

In Celtic rituals as in those in many different lands on Midwinter night, all lights are extinguished at dusk and the Crone Goddess or the person representing her invites those present to walk into the darkness with her, an act of pure surrender and faith that light will return.
In some myths it is the three mothers, the Celtic Madrones or the Romanised Matronae who are the midwives of the Sun King.

In passage graves throughout the world, such as Newgrange in Ireland people have waited in darkness for the first shaft of light on the Solstice morning to illuminate the inner shrine. Then their lanterns were relit from a single flint.

People from time immemorial have also hung lights from evergreen branches to encourage the trees and vegetation to sprout greenery again and lit bonfires (now remembered in the chocolate Yule log) to give power to the sun.

Because of the long nights and bad weather people gathered in homesteads for twelve nights or even longer to feast and ask that the deities would bring abundance, the origin of the mediaeval twelve days of Christmas in European lands the Vikings colonised.
On the night of the Solstice, the fertility god Freyr was said to ride over the world on his boar that shone with light restoring light into the world. Later this role was transferred to Baldur, the god of light who died and was reborn.

Huge wooden wheels were set alight and rolled from the tops of hills or mountains where possible into water. The boar, crowned with laurel and rosemary in honour of Thor, Lord of the winter, formed the feast. The father of the family put his hand on the boar’s head, called the Boar of Atonement and swore he would be faithful to family and fulfill clan obligations.
The Anglo Saxons named first December 21 and then in Christian times December 25 the Day of the Infant. Christmas Eve/Solstice Eve was called the Night of the Mothers or Modraniht after the shadowy guardians of the hearth and home, the midwife goddesses who protected all women in childbirth and their infants.
Christian

In AD 320 the Christian Church placed the date of the birth of Christ as December 25 to overwrite the pagan births of earlier Sun Gods at the Mid Winter Solstice.
In Ireland today and in other lands where there is Celtic ancestry a candle is sometimes left burning in a window on Christmas Eve to guide the Virgin Mary on her way.

The most famous midwife goddess of Christmas was St Bridget who immediately after Christ was born, according to myth placed three drops of water on the new born infant’s head, in accordance with Celtic birth custom, so confusing those who try to keep a consistency of dates Bridget actually lived four centuries after the birth of Jesus. This is probably a Christianised legend from old Ireland.

Mithras the Persian Sun God, whose cult spread throughout the Roman Empire, was born in a cave at Midwinter, predating the birth of Jesus. Some legends record he emerged from a rock (Mother Earth).
Attis, consort of Cybele was also born on this day.
In Ancient Southern Europe, the Mid-Winter Solstice was called Brumalia, the return of the Unconquerable Sun.

The Egyptian Mother Goddess Isis gave birth to Horus, the young Sky God on this night, secretly in a cave and as with the infant Jesus Horus had to be hidden, because the reigning King, his uncle Set, like Herod, would have killed him.

Ways of Marking the Festival in the Modern world